Angela was born, raised, and is still living in the Bay Area of California. She studied and worked in the graphic design field for 10 years, but on the side, she has been always fascinated by fantasy worlds and fairies.

She has a background in professional fairy and princess parties and that brought her to designing her own costumes and eventually, wings that she sells to the public.

She started selling iridescent fairy wings when there were none yet on the market because she wanted wings that looked like they could have been plucked from a real fairy.

Angela has been making and selling fairy wings for over 10 years, and as a sole proprietor for 7 of them.Her wings have been used in Victoria Secret fashion shows, on Katy Perry in Every Day is a Holiday,  Music video and in multiple fine art photography projects.

Get in touch with Angela

“If you can dream it, you can do it … but be practical and copyright your work!”

Special thanks to Angela for joining me today. See you next time!

All artworks by Angela Jarman, used with permission 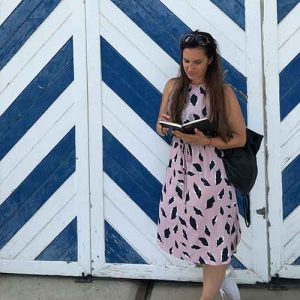 Hi, I am Iva (rhymes with “viva”). I am an artist, illustrator, teacher, and the founder of Art Side of Life™️. I've worked as a commercial artist since 2009. I believe that we are all creative in infinite numbers of ways so I’ve made it my mission to teach you everything I know, to contribute to waking up your creative genius.

Ep.147: Victoria Ying on how to make a portfolio for animation studios

Hey, guys! In this episode, I am chatting with Victoria Ying, author, and artist from LA. Her film credits include Tangled, Wreck it Ralph, Frozen, Paperman, Big Hero 6, and Moana. She was featured in the book Lovely - Ladies in Animation.

Hey, guys! In this episode, I am chatting with Ismael Alejandro Moreno Ozuna, aka IAMO from Tijuana, Mexico. He is a Cartoonist and Character Designer mostly known for his popular Nerdmigos webcomic where he shares his passion for telling stories.

Ep.71: How to make the best out of every situation with Bea Blue

Bea is an illustrator and vizdev artist from Spain. She is a freelance artist and she works in children's literature illustration and in DreamWorks.

Ep.76: Michele Arrieta on the importance of 1-on-1 mentorship

Michele Arrieta is an illustrator and graphic designer living in San Diego, California

Ep.123: How to improve your skills fast with Brett Bean from Drawn To It Studios

Hey, guys! In this episode, I am chatting with Brett Bean, a Character Designer, Visdev Artist, and teacher. He is the owner of Drawn To It Studios, creating original content and outsourcing for clients like Disney, Dreamworks, Riot Games, and Marvel.

Ep.102: Denis Zilber on why you should concentrate on storytelling and not tools

Hey, guys! In this episode, I am chatting with Denis Zilber, a freelance illustrator, and visual storyteller. He has worked with magazines like GQ, Maxim, National Geographic and animation studios like Hasbro, Dreamworks, Nickelodeon among many others.